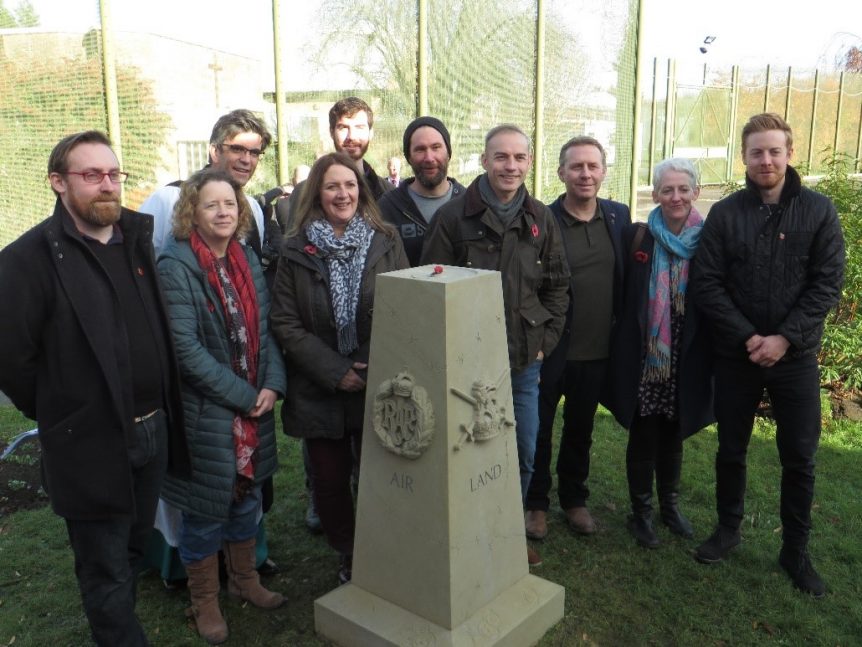 Weston College learners at HMP Erlestoke have collaborated with stonemasons from Salisbury Cathedral to create a WW1 memorial that stands inside the razor-wire topped fences of their jail.

Learners in the Wiltshire prison created the memorial together with seven masons from Salisbury Cathedral, who then carved it out of a block of limestone from a quarry close to the gates of the prison.

Lee Andrews, head mason at Salisbury Cathedral said: “It has been a real privilege for masons to work on this project and collaborate with the prisoners on their design.

“Between us we have worked hard to make something worthy of those who sacrificed everything.”

The site chosen for the Erlestoke war memorial is a place that all prisoners pass as part of their daily routine, a lasting reminder of the price paid by earlier generations and what can be achieved by working together as a community. 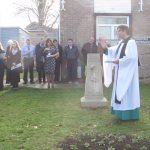 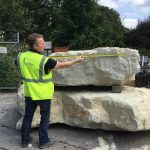 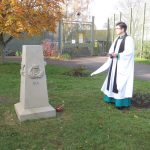 The finished stone in pride of place

Elizabeth Williams, Erlestoke’s Learning and Skills manager, said: “This work has allowed us to explore ideas like accountability, loyalty and honour with prisoners and consider the world beyond their confinement. Some are veterans of other conflicts and have a profound understanding of what it means to go to war, while for others it has been a learning process.”

Prisoners and stonemasons met for the first time on Tuesday 13th November 2018 at a dedication ceremony led by the Dean of Salisbury, the Very Rev Nicholas Papadopulos. Previously one of the cathedral’s stonemasons had been able to go into the prison and talk face to face with prisoners.

Afterwards, prisoners, some of whom are former members of the armed forces, spoke emotionally about what the project meant to them.

Their coordinator, who goes by the nom de plume Jailhouse Moose, said it had been a way of breaking free from the “prison bubble”.

“It is tempting to isolate oneself from the outside world, to become wrapped up in a bubble,” he said. “Yes, I am serving a sentence, yes I deserve to be serving that sentence, but it is still my time, it is still up to me to make as much positive use of my time as I can.

“One of our intentions was to show that the majority of prisoners are trying to find a better version of themselves in here. We are not all drug-taking villains spending our days playing on game consoles. Often the difference between us and those outside is that we reacted in an instant of weakness or pressure.

“Our efforts here meant that as I watched the remembrance events I felt a sense of connection with society. As I saw the documentaries, the memorials and the special edition newspapers I could feel proud that we too were marking events despite being in prison.”

Wayne, who left the military with post-traumatic stress disorder, said the project had given him a feeling of connection with his fellow prisoners and the world outside the gates. “Being in the army meant you were in a team. This was about being part of a team again,” he said.

Another learner heavily involved in the project, Jott, an artist by trade, said: “Being a prisoner is only one part of what I am. I am more than the mistake I made that put me in here. Just because I am in prison doesn’t absolve me of my right and my duty to say thank you for the sacrifices made on my behalf.”

The prisoners came up with the idea as part of a wider regional education and art project organised by Weston College for the World War One anniversary celebrations which culminated in an exhibition of the best of the prisoners’ work at Leyhill Grounds coffee shop. The display is available for the public to view until 16th November when judges will decide the regional winner in each category – Artwork, Short Story and Poetry.

Weston College’s Curriculum Manager at HMP Erlestoke, Daniel Hobbs, explained that “This has been a powerful way to raise important issues with prisoners and to encourage discussion in an unforced way. The project leaves behind it a permanent statement, one which will be seen every day by the prisoners as they exercise or move from one part of the prison to another.” 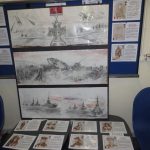 Artwork from HMP Erlestoke entered into the regional competition 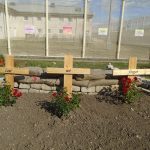 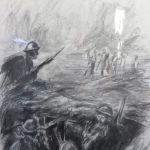 A scene from WW1 captured by an artist at HMP Erlestoke

The design for Erlestoke’s memorial was a collaborative project in itself and it pays tribute to the army, air force and navy. It includes the inscription: “Now listen for a moment/the world is silent/peace be with you.”

The memorial has been placed in a prominent spot next to the visitors’ centre and Rory Stewart, Prisons’ Minister said of the monument “This memorial is a moving tribute to the fallen soldiers who lost their lives bravely serving our country.

“I am grateful to Salisbury Cathedral for giving offenders from HMP Erlestoke the chance to participate in this hugely worthwhile project. Such opportunities provide a true sense of purpose – helping to support rehabilitation and allowing them to give back to society.”

Governor of Erlestoke prison, Tim Knight said: “There’s no doubt that there are challenges managing a prison like this but that shouldn’t overshadow the remarkable work being done by our dedicated and passionate team. We are committed to working with partner agencies like Salisbury Cathedral to provide intervention programmes, and skill and vocational based training and education to make a difference.

“We hope that by offering prisoners opportunities to participate in projects like this we can assist in their rehabilitation. None of this is a simple fix but our long-term goal.”

Weston College has also held events around the prisons in the South West of England to honour and remember those who have served including a wonderful exhibition of one learner’s artwork at HMP Guys Marsh where a tea party was held in the Jailhouse Cafe whilst his work was exhibited. Over £400 was raised for the Royal British Legion during the event and you can see a few of his pieces here: 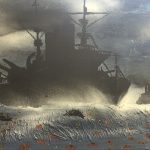 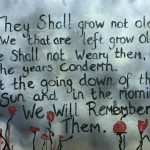 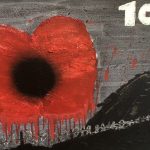 Read more about the fantastic HMP Erlestoke project at: